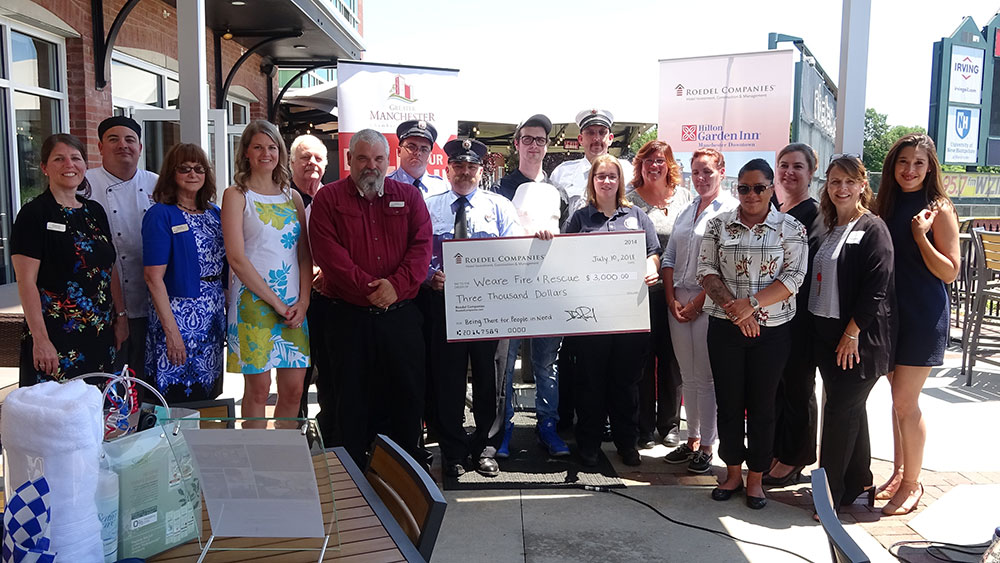 WILTON, NH – When a Hillsborough man was trapped in an industrial lathe with his upper body crushed, chances of survival were faint.

Nick Keane, 21, however, lived through the horrifying March incident thanks to the quick response of the Weare Fire and Rescue Association. They stabilized the badly injured man and coordinated the arrival of the Dartmouth-Hitchcock Advanced Response Team to airlift him to Dartmouth-Hitchcock Medical Center in Lebanon.

After spending nearly a month in the hospital, including 10 days in the intensive care unit, and having five surgeries performed on him, Keane eventually returned home and is continuing his road to recovery.

Keane was on hand Tuesday when the Hilton Garden Inn Manchester honored the members of the Weare Fire and Rescue for their service by donating $3,000 to the volunteer association during the Greater Manchester Chamber of Commerce’s monthly Spotlight on Business. Twenty-five bags of non-perishable foods and personal items, which were used as centerpieces during the event, were also donated to the Weare Food Bank.

This is the third year HGI management has selected an organization to support during the annual chamber event they host. Previous recipients include Friends of Manchester Mounted Patrol and the New Hampshire Coalition to End Homelessness’ Granite Leaders program.

Nick joined his mother Mandy Keane, the front desk manager at HGI Manchester, for the presentation.

"It’s amazing what they did to keep him alive," Mandy Keane says.

"When we started this two years ago, we wanted to make sure we were helping organizations that were making a difference,” says Sharon Nista, Director of Sales for HGI Manchester. “These brave men and women are truly making a difference."

Capt. Mark V. Bluteau, a 17-year veteran of the Weare Fire and Rescue, accepted the check on behalf of his association. He also does CPR training for the various Roedel Companies properties.